Russian Salad Sandwich: made of chicken, eggs and a pickled cucumber with a low-fat dressing. Perfect picnic or lunch meal you can make in just 10 minutes!

There was no such a thing as Russian chicken salad until I made it and called it Russian. If you want to know why I did it, I tell you. First of all, the most popular Russian salad, referred to as “Russian salad” abroad is called “Olivier salad” in Russia and is mainly associated with the New Year’s eve, together with tangerins and sparkling wine. Olivier salad is usually made from boiled and diced potatoes and carrots, diced Bologna sausage and pickled cucumbers, green peas and eggs with a lot of mayonnaise. This is the version of Olivier salad that was insanely popular in the Soviet Union, and is still popular in Russia because it’s easy to make and the ingredients are cheap and easy to get. Here it how it usually looks: 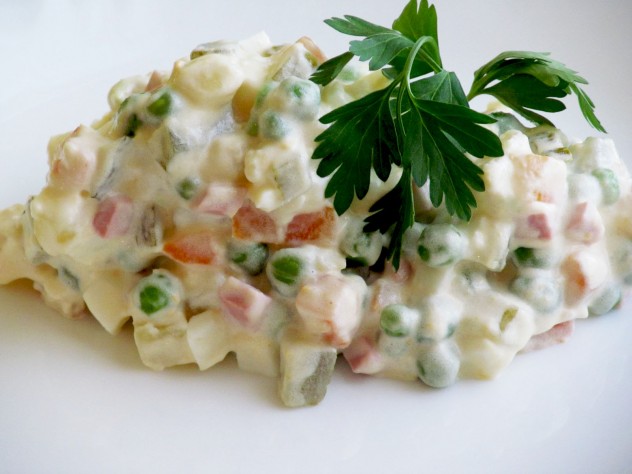 Why is it called “Olivier salad” in Russia, while the rest of the world knows it as “Russian salad”?  It was invented back in 1860s by Lucien Olivier, the chef of the Hermitage, one of the best restaurants in Moscow at that time. Originally, it was made from lettuce, caviar, smoked duck, capers, hazel grouse, and other delicacies. It barely resembles today’s Olivier as we know it. Anyway, the salad was extremely successful. As the recipe was kept in secret, the Olivier salad was exclusively offered in the Hermitage, until the greedy sous-chef had stolen the recipe and became a chef of an inferior restaurant, where he served it under the name “Stolichny” (“Capital”) salad. He also published the recipe in several cooking magazines and books, which made it even more popular. In 1905 the Hermitage was closed, and Olivier left Russia. His salad stayed though but the ingredients were replaced by cheaper and more available substitutes. It still can look fancy in Russian restaurants: 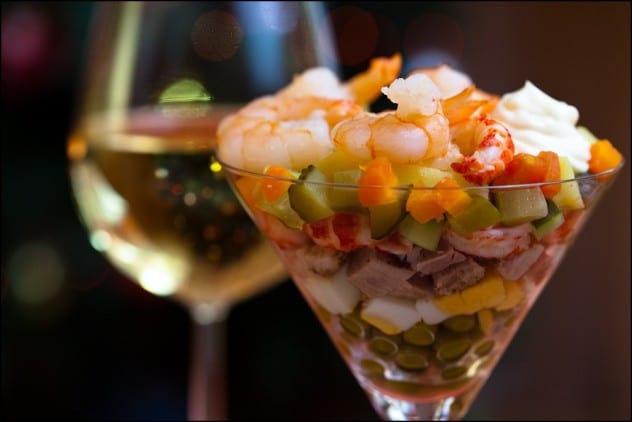 That was the story of the Russian salad. One more fact: you NEVER put a salad on your bread in Russia. You normally eat it as a separate meal. I have to confess: I broke this rule. I just couldn’t resist it because I had freshly baked whole grain bread straight from the oven. 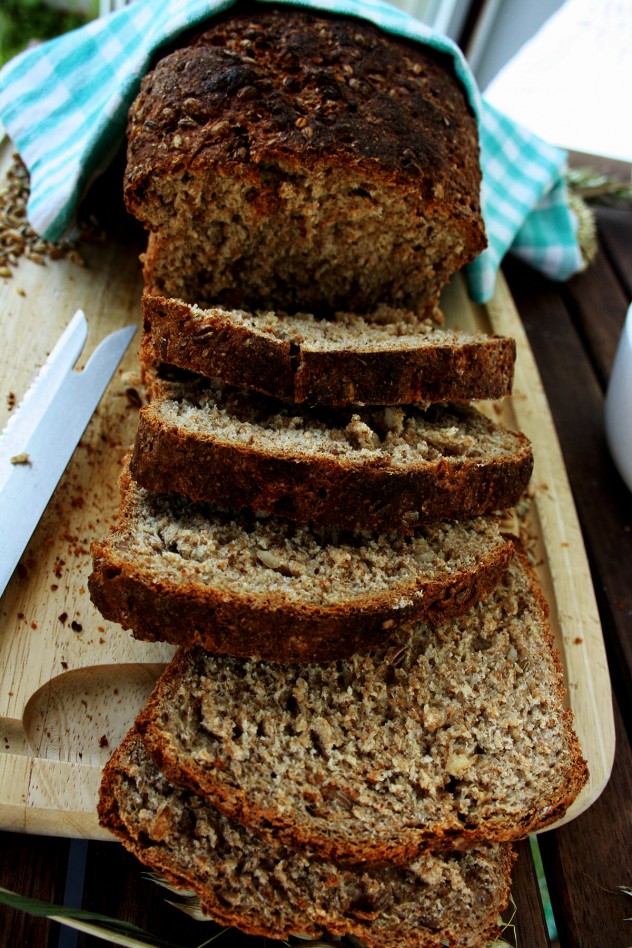 Well, I wasn’t into anything fancy or high-caloric. So I made a Russian salad my way: Greek yoghurt + mustard + cream cheese instead of mayonnaise, boiled chicken breast instead of Bologna sausage, no potatoes, and a few other changes to make the salad spreadable. In the end, it was a totally different dish but as I started from the idea of Russian salad (now you know how it’s called), modified, I still can call it that way. My version is maybe far from the original but it’s definitely tasty and low in calories. If you choose to spread it over the whole grain wheat bread, just like I did, it would be one more benefit to your health. 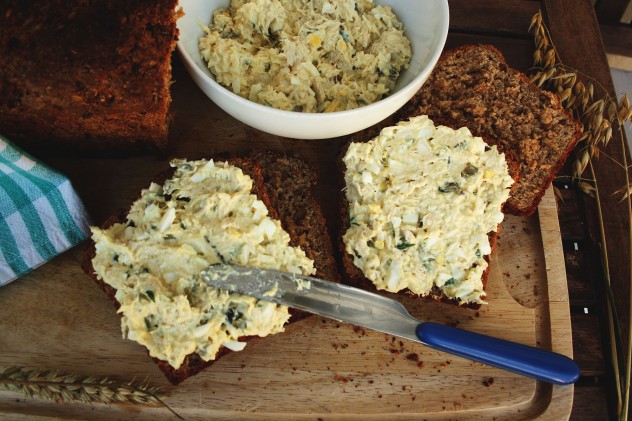 How to Make Russian Chicken Salad

The recipe of my Russian salad is written below. It takes just 10 minutes to prepare! I made it for dinner but it would also be a great breakfast or picnic meal. I hope you enjoy it! 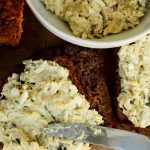 The recipe makes enough salad for 5 sandwiches. Store leftovers in the fridge for up to 3 days.
Tried this recipe?Follow @happykitchen.rocks on Instagram and show me the recipes you are making from my blog using the hashtag #happykitchenrocks! 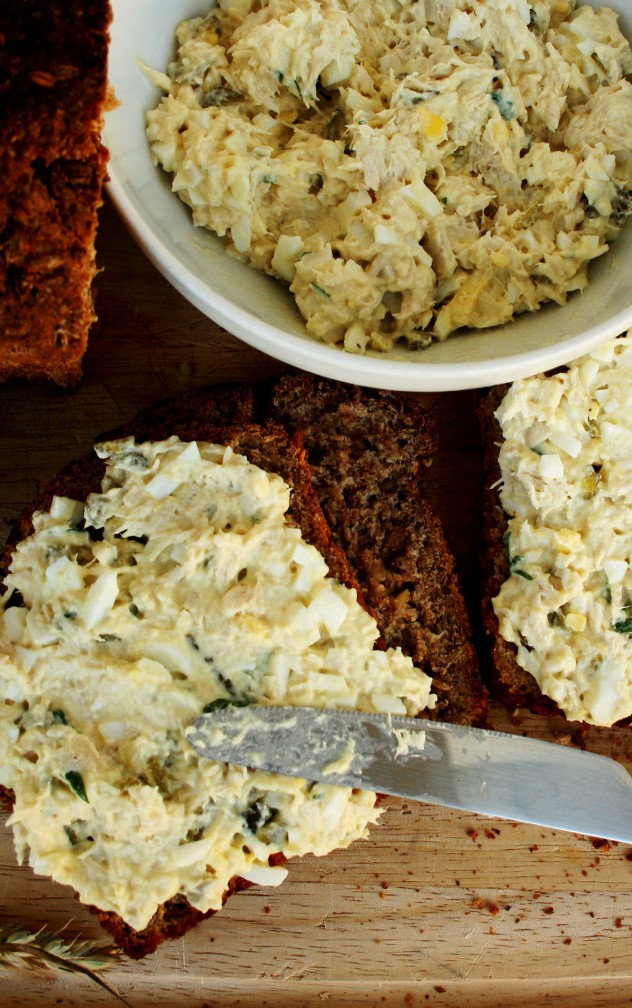 Have you tried Russian salad before? What is it like in your country? Drop me a line 🙂   Greetings, Elena

Very simple and tasty. I poached the chicken in chicken stock with a little white wine, bayleaf and pepper corns. I discoverd at the last moment I had no parsley but I did have dill which worked wonderfully. This recipe is a keeper. Thank you!

Thank you for your feedback!

Thanks for the recipe. Yours is the only one I have found that showed how to incorporate whole grains, as opposed to flour, in a bread recipe. If it turns out well, I will be able to use this method with other grains. Hopefully, I can vary the soaking time to vary the crunchiness of the grains.

Hi Karen, you can try this one: Whole Grain Spelt Bread. Hope it helps!

FYI Olivier died in Moscow in 1883

My bad, I meant to write Olivier's family. Thanks for pointing that out!