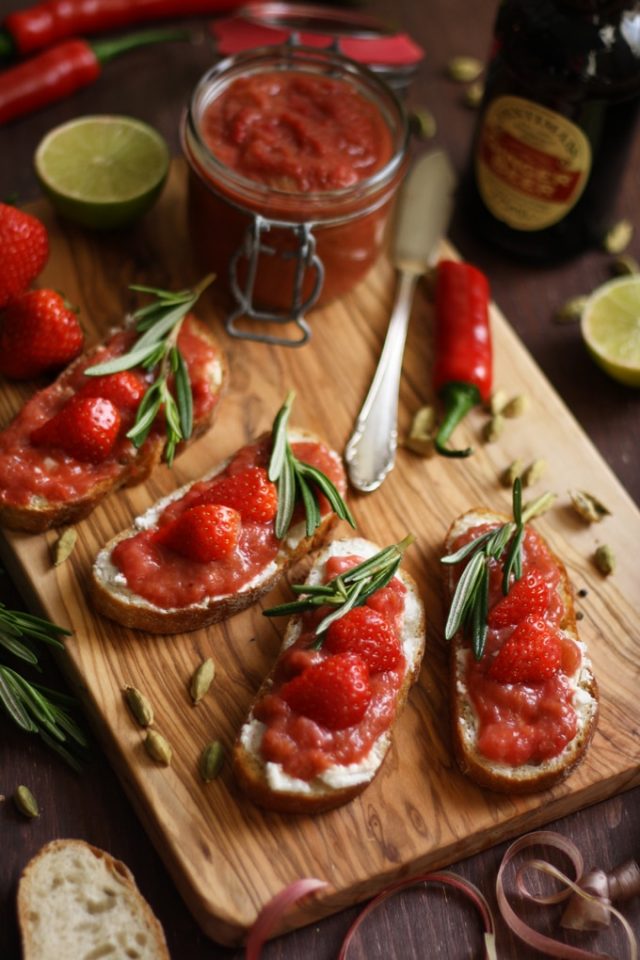 There is nothing easier and tastier than these goat cheese crostini with rhubarb chutney. I’m all into experimenting with the savory side of rhubarb and I got an idea of pairing it with tender and soft goat cheese and fresh crusty ciabatta bread. I couldn’t be more satisfied with the result.

It’s such an incredible taste combination you need to try if you love rhubarb. In fact, if you are not a fan of rhubarb, you might change your mind after trying these crostini. For a heartier comfort food version, check my favorite vegan mushroom crostini recipe. 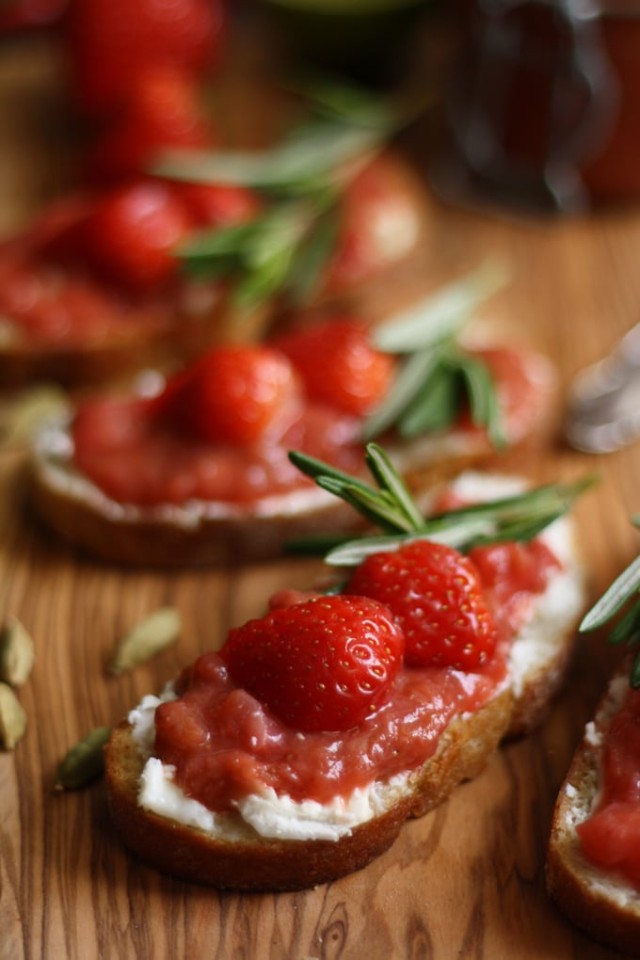 There is so much more to rhubarb than a rhubarb pie. Last week I made this delicious rhubarb chutney with strawberries and ginger, and I was enjoying it the whole week as a bread spread or as a veggie dip. Tomorrow we are planning the barbecue, so it’ll be a nice addition to it as well. 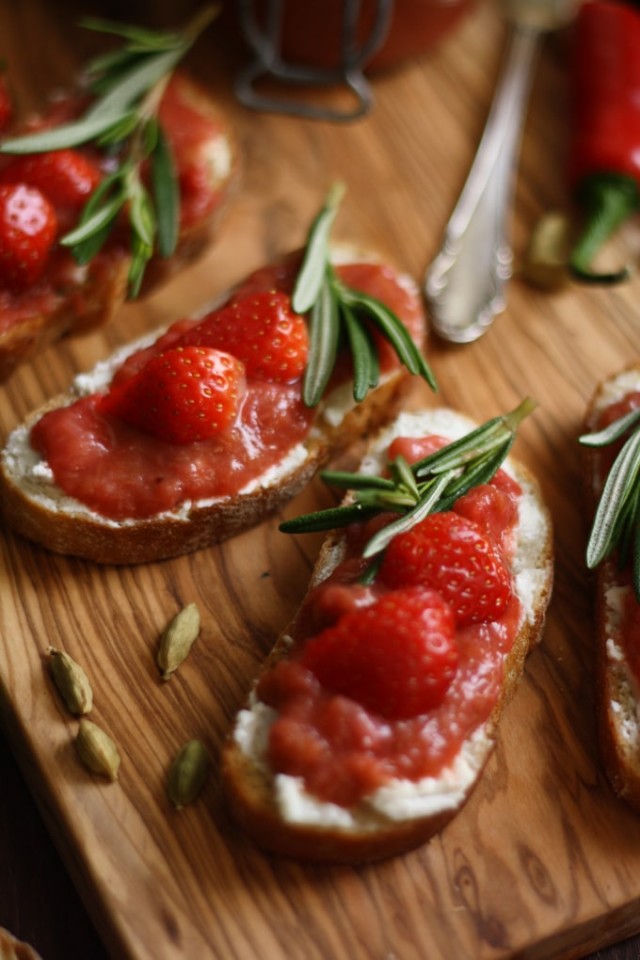 If you are looking for an easy and yet impressive appetizer, crostini is always a good idea. I made them as an addition to a cheese plate and there couldn’t be a better choice. Crostini are so versatile and there is an endless variety of toppings for them. 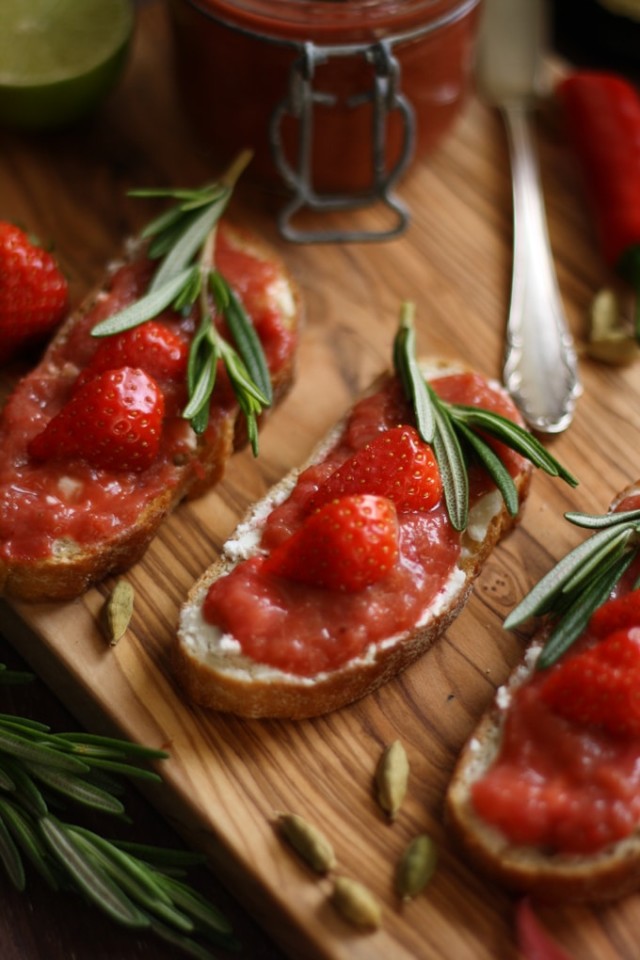 How to Make Goat Cheese Crostini with Rhubarb Chutney

If you already made a bunch of rhubarb chutney (which is a must this season!), then it’ll take you no more than 10 minutes to assemble the goat cheese crostini. Both ciabatta bread and baguette will work well for this recipe.

Just slice it and toast it on a frying pan with a bit of extra virgin olive oil, salt and pepper for a couple of minutes. Spread the soft goat cheese and then the chutney over your bread slices. Garnish with quartered strawberries and rosemary stalks. 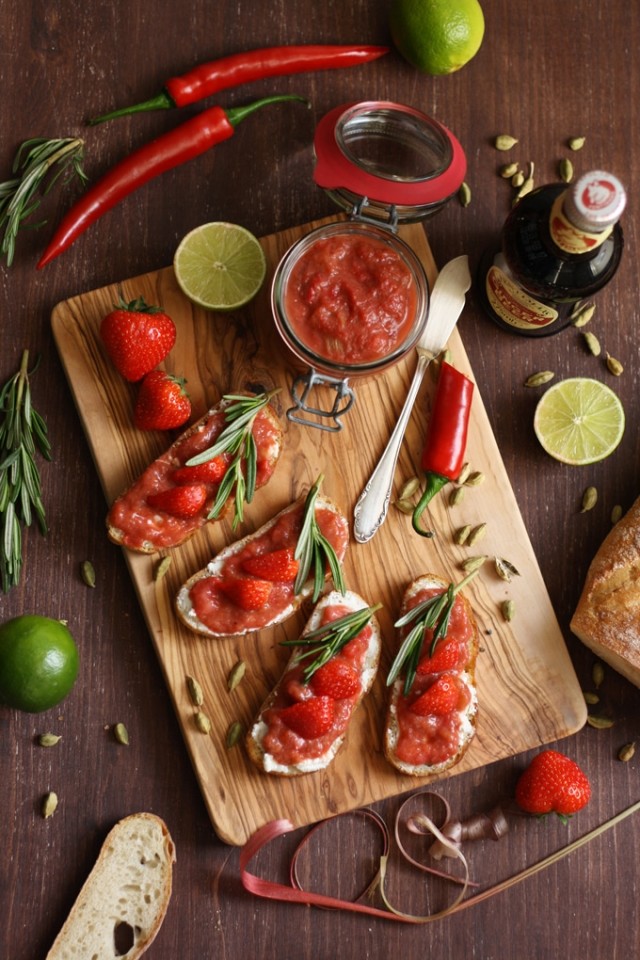 It looks very impressive and is literally the easiest crostini ever. Moreover, it’s so flavorful as the goat cheese pairs so well with the rhubarb chutney. It’s tangy and sweet with a touch of spicy and it’s perfect for late spring or summer as it uses fresh seasonal produce. 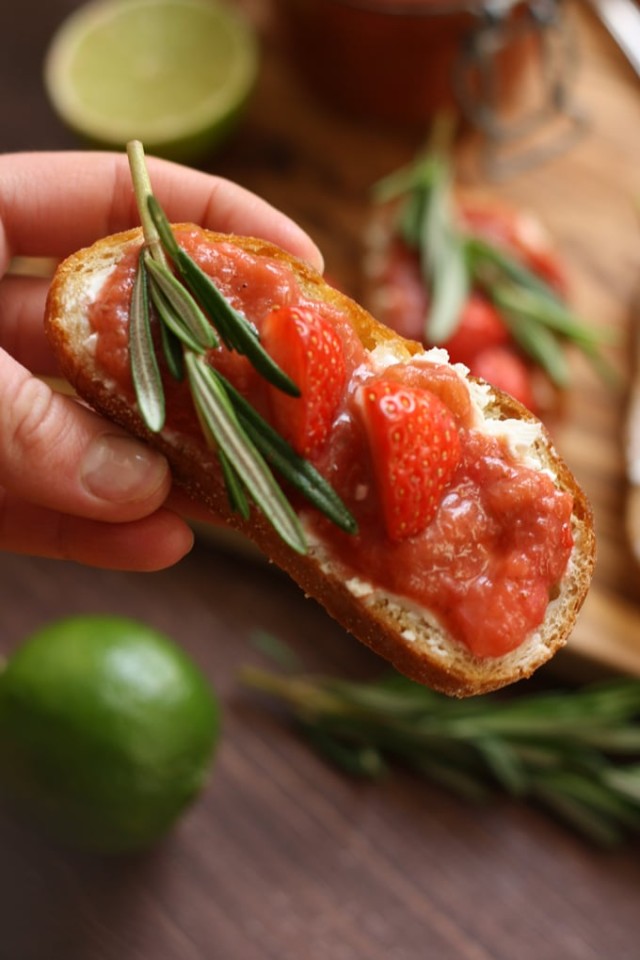 For my goat cheese crostini with rhubarb chutney, head to the full recipe below! Let me know how you like it! 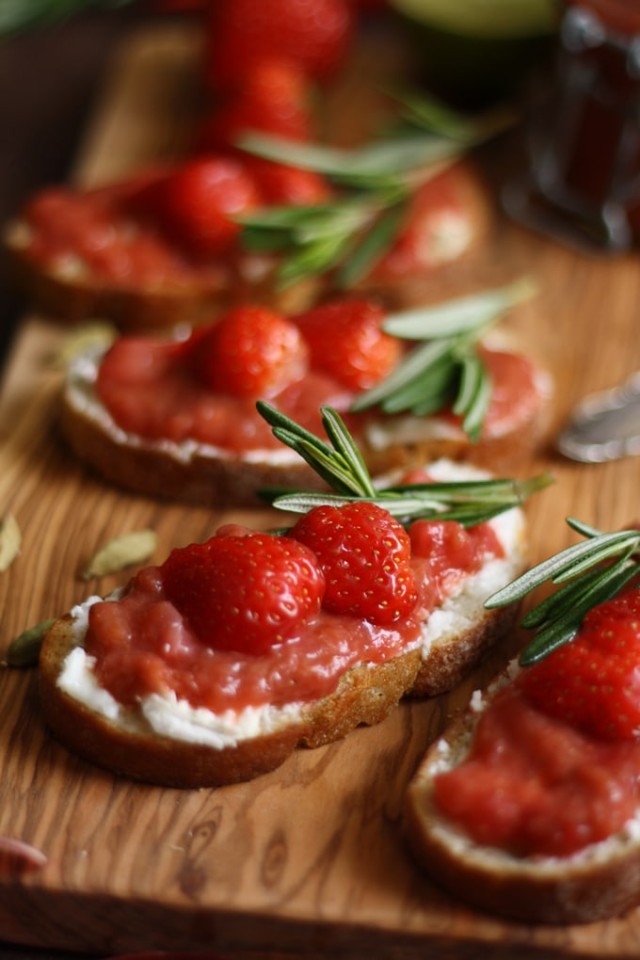 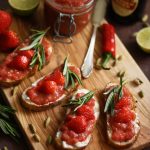 Both ciabatta bread and baguette will work well for this recipe. 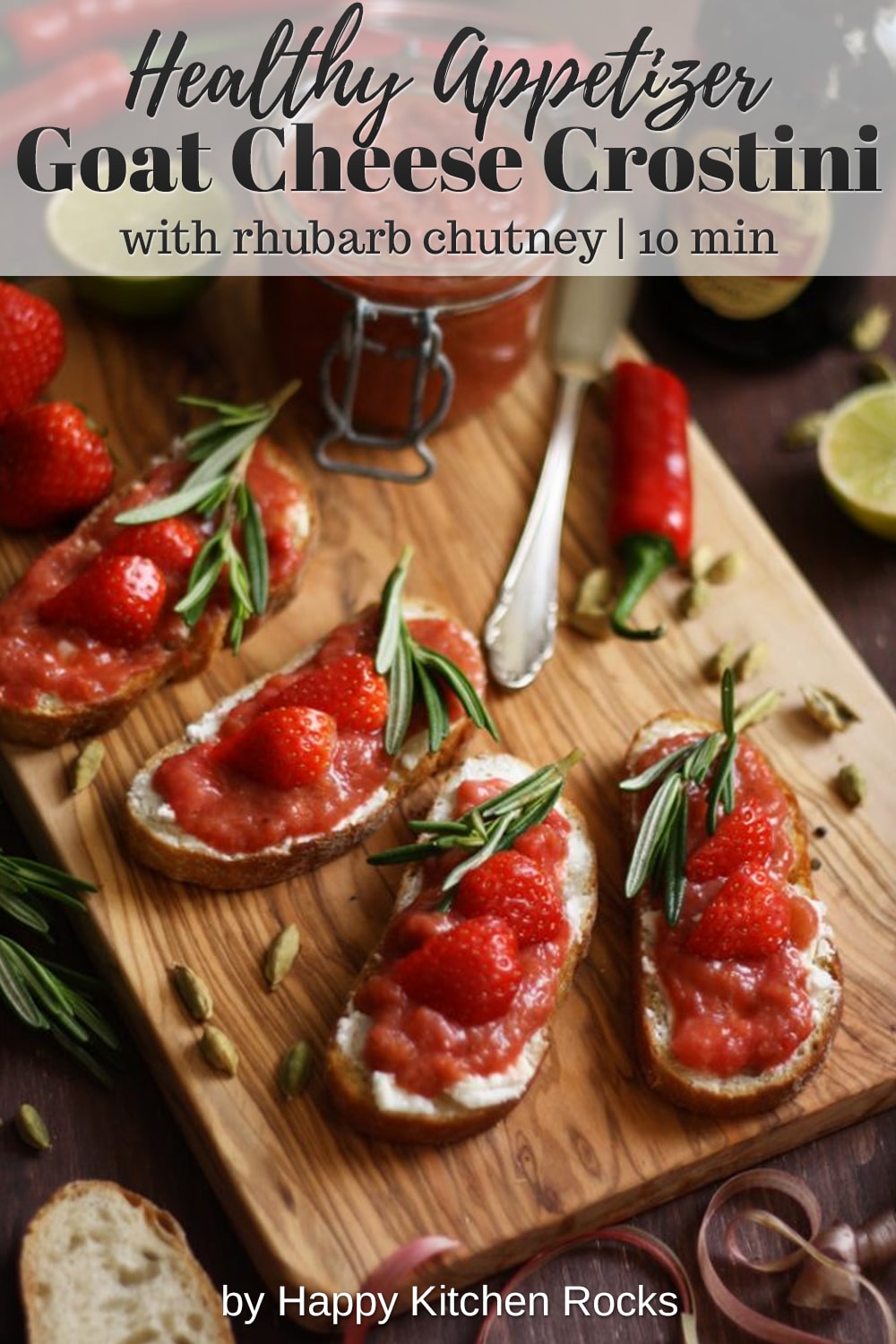 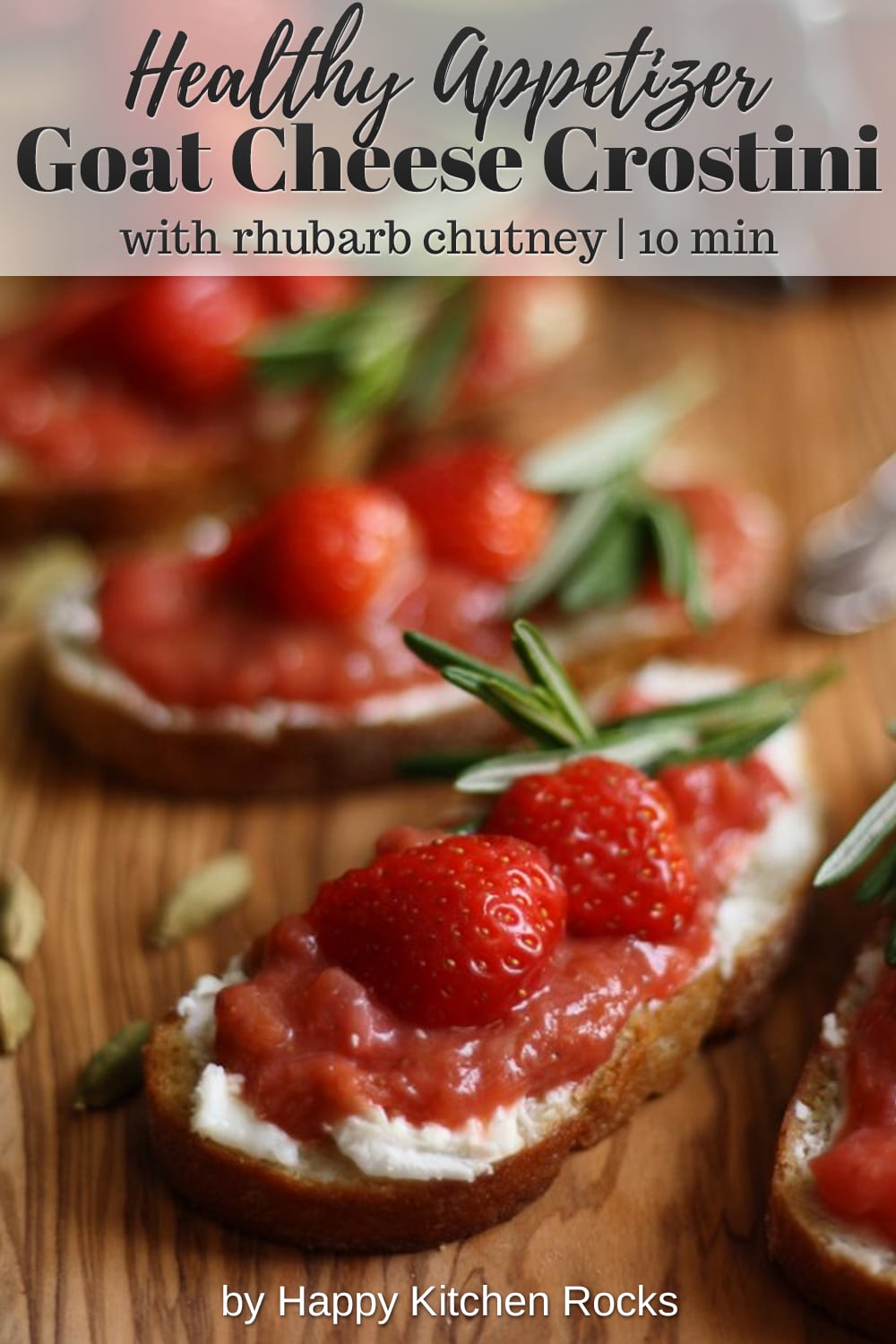 Your recipe inspired me to go savory with rhubarb, but I didn't have all the ingredients so here's how I mixed it up: left the brown sugar and cider vinegar out of the chutney, just a spiced cooked veggie mixture. I baked puff pastry (instead of ciabatta), spread with cream cheese (instead of goat). Then, I added your chutney to that, along with some shredded chicken. Popped it back into the oven just long enough to get the cream cheese melty. My husband About. Fell. Over, he couldn't believe it was RHUBARB and CHICKEN! And man, oh man, did it ever work. So, not quite your recipe, but the inspiration for mine, and I've given it out to anyone who's tried it! I know your site is vegetarian, but I had a rotisserie chicken that wanted using. Anyway, that was a couple of summers ago, and it's become a staple recipe every time the rhubarb starts to flourish! :) Thanks for a great one!!

Hi Chrissie, thank you so much for your kind feedback! I really appreciate you leaving a comment on my recipe :) I'm so happy it was inspiring!

I think your recipe made me reconsider my relationships with goat cheese. I'VE GOT to try this recipe - it looks really yum!

Goat cheese with fruits is so good! Hope you give it a try :)